Empowering myself and working it out.

As a self employed woman living near the border between the north and south of Ireland, my work comes in all shapes, sizes and locations. I was lucky enough to work recently on a project with a good friend Bee Smith in County Cavan. It was part of a wider project funded by Peace IV which focuses on border towns most affected historically by the troubles.  Our project along with ten others, in diverse media, were facilitated through the fantastically creative Cavan Youth Arts Lab. Cavan is a mainly rural county of around 3500 people who’s Art’s office is passionate about access to the arts for all.

Under the umbrella of Diversity and Ambition we worked with a group of girls from the Templeport Foróige youth group aged 11-14. We wanted to look at diversity within the group as well as within each individual member, their own diverse range of opinions, personal ambitions, likes and dislikes and the diverse traditions and physical landscape of Cavan.

We began by introducing a talking stick. The idea of a talking stick is that the person holding it can talk and everyone else listens, without speaking. Mine is made from a piece of driftwood rubbed smooth by the waves at Corry Strand on the shores of Lough Allen in Leitrim, with the addition of carefully selected beads, yarn and feathers from the magpies that nest by my home, a wood pigeon from Florencecourt woods and one of my chickens. As it’s passed around the feathers sway and the beads click together satisfyingly. It is lovely to hold and often hard to pass on once the power of having a captive audience takes hold! It’s a fantastic tool to focus a group on listening carefully to one another in a way they may not have done before.

The stick was passed around the circle and a question was asked such as “What is your favourite colour?” On the next round we asked more revealing questions such as “What is you favourite season and what do you like about it?” As the weeks passed and trust was built our questions and answers went deeper and the replies became more revealing of each individual. The girls enjoyed this part of our session so much they decided to make their own talking stick to use with the wider Foróige group.

Another way we used the circle was to create stories as a group. Each person would pick a card with a character, place or activity which they would have to weave into the story as it wove its way around the circle. The girls usually managed to bring lots of humour into the stories and this really sparked their imagination for the next step of writing Haiku poems with Bee, a creative writing tutor with great skill in finding the inner writer that is in us all. Over the project, the girl’s individual haikus were laid over photographs of their beautiful county, following a visit to the Cavan Burren Park and the Shannon Pot and combined together to form a two Rengas, a collection of haikus linked together to form a longer poem.

Each girl customised her own journal by creating a collage of images that they loved. The journals were used to record their creative writing and thoughts about the project. They also had a chance to try Touch Drawing, a technique which combines meditation and simple mark making to bring out creativity. The Foróige group leaders said they’d never known them be so quiet!

The visit to the Burren also inspired two collections of textile art. Each girl created a felted landscape, working colours over a piece of wet felted wool using a technique called dry felting using photographs they had taken on their trip as inspiration and combining materials collected on their trip. Each piece was unique and beautiful.

The second was a collaborative weaving using wool, fabric and ribbon and combining sticks, rushes, moss, pine cones and lichen from the Burren and Shannon Pot. Each member of the group wove some of the piece as well as the Foróige group leaders, myself and Bee and anyone else who visited us during the project. Once completed it was tied to four sticks collected from the Burren, creating a framework.

You will see words woven in to this textile piece and this is where the next part of our project came in. Inspired by a book called The Lost Words we asked each girl to be a guardian of one of the words taken out of the 2007 edition of the Junior Oxford English Dictionary. They were astounded that the names of so many things they saw around them every day were considered no longer relevant to children’s lives. In the journals they had been working with during the project they illustrated their word and also wove it into the textile piece. They learned about their word, the traditional connection and beliefs about the animal or plant and thought about what it meant to them and their community. Ash for example is used to make hurling sticks which many of the girls use and kingfishers are often spotted at a nearby stream. Conkers are used for playground games and bluebells admired during local woodland walks.

Early on in the project we introduced the idea of making a wish by asking “What do you wish for yourself and what do you wish for others?” This was inspired by one of the girls, having a birthday coming up and dropping it into the conversation in the hope it might produce cake! Cupcakes did indeed appear with a candle each to make a wish. The wish was put into their journals and a second wish for someone else was put into a hat and each picked one out. The smiles on the faces of each when they saw a wish from another were priceless!

This inspired the idea to make our own clootie tree. At many holy wells in Ireland and Scotland you will find a tree with all kinds of ribbons, holy medals and strips of cloth tied to it. With each item comes a prayer or wish for someone or something. A cure for an illness, a reconciliation, a pass in the driving test or exam, an end to suffering. It’s such a hopeful sight to see. and the origin of action with intention. On branches of willow and ash the girls each tied a piece of fabric printed with their wishes: a wish for me, a wish for you and a wish for us. To read what each wished for gave us hope for the future of our world. 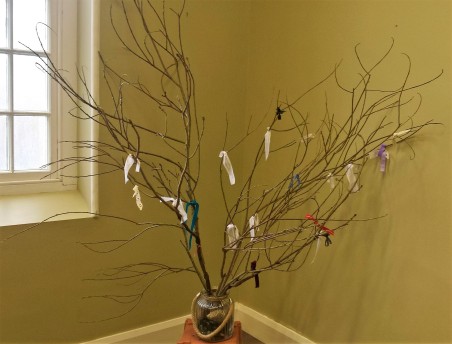 During our final session the girls were in great spirits. Taking a break from preparing their work for exhibition they showed us their dance routines and sang along to their favourite tunes. They thanked us for the experience and we thanked them for working so enthusiastically.

And so the project came to a close. We said our goodbyes and wished everyone well in the future. As we drove home Bee and I discussed the possible impact we may or may not have had on each individual and the impact the project had had on us. We recognised that there was really no way of knowing if we had made any difference, but were happy that we had done our best to nurture and encourage each one, to listen and respond to their needs and to help them recognise their own unique contribution to the world. Then something magical happened!

No being an overly tidy person, I left a bag of natural materials collected on our trip to the Burren in a corner of my dining room come office, waiting to be seen to at some point. A few weeks after the project had finished I heard a rustling noise coming from the bag. Hoping it wasn’t a mouse, I gathered up the top of the bag and holding tightly ran outside and gently tipped the contents on to the ground ready to jump back at first the sign of brown fur and tail. What I saw instead amazed me. A beautiful green and yellow butterfly had emerged from its cocoon attached to one of the branches. It illustrated perfectly our wish to incubate something magical in the girls and was even more powerful in it’s resplendent colours of Templeport Gaelic football team!

Hope is indeed a winged thing.

An exhibition of the work produced can be seen in Dowra Courthouse with the opening on Thursday 21st of June at 3pm.